Mosul: Saving Lives on the Frontline

Mosul: Saving Lives on the Frontline

In one of the deadliest urban battles since World War II, the war against the so-called Islamic State in Mosul took a devastating toll on the residents of Iraq’s second largest city. Thousands of civilians endured months of trauma, suffering and fear, held hostage by the fighting between ISIS militants and Iraqi Security Forces backed by US-led coalition forces.

As Iraqi troops pushed forward through the densely populated streets of western Mosul’s ancient quarter in the summer of 2017, many civilians escaped in a state of critical malnutrition after surviving months without enough food and water. Others suffered from old and infected wounds that had been left untreated due to lack of access to medical assistance.

With little more than a few makeshift hospital beds set up inside abandoned buildings and only the most basic medical resources, medics from international medical organisations Global Response Management and Academy of Emergency Medicine, together with their colleagues in the Iraqi Armed Forces, worked day and night to provide lifesaving emergency treatment to injured and sick civilians and military personnel.

As Iraqi forces gained ground, the medics moved forward, setting up makeshift field clinics – or trauma stabilization points – as close as possible to the frontline. As casualties arrived at the clinic, a medical team leader made an immediate triage assessment of each person’s needs and injuries. After being stabilised, patients were taken to a nearby hospital for ongoing care.

Many of the patients described the brutal conditions inside the Old City where they’d survived on dirty river water and very little food. “We’ve had no food for nine months, since the city was surrounded”, explained Hadr, a 29-year-old biologist. “There is no food in the markets, only some cow meat which is very expensive. We bought rice before the city was surrounded but now it’s finished.”

Others expressed relief and joy at having escaped ISIS and the death trap of Mosul’s Old City. One young woman who arrived at the clinic with an injury to her face cried with relief to be free. “Today is our birthday,” she said,” because it’s the first day we are free.”. Her two-year-old son was killed in the fighting a day earlier. 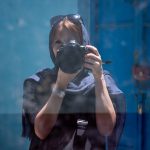 Claire Thomas is a freelance photojournalist and photographer from Wales, UK, whose work focuses on issues surrounding conflict, humanitarian and environment crises, and stories of social and cultural significance.

Between 2016 and 2019, Claire was based in northern Iraq covering the country’s efforts to defeat ISIS and recover from decades of conflict. During the final liberation of the city of Mosul in June and July 2017, she worked on the frontlines photographing the work of volunteer medical professionals as they provided emergency pre-hospital treatment to civilians and military personnel injured in the fighting.

Prior to Iraq, Claire spent time on the island of Lesvos in Greece, and the “jungle” in Calais, France, chronicling the plight of refugees escaping conflict and persecution seeking to establish a new life in Europe.

Her work appears in leading newspapers and magazines including The Sunday Times, Geographical Magazine, The Guardian, and Al Jazeera. She also works regularly with UN agencies worldwide including UNHCR and UNDP, as well as international non-governmental organisation.

A keen horse rider, adventurer and nature enthusiast, Claire has also undertaken several independent projects in diverse and remote corners of the world, including Alaska, Wyoming, Lesotho, Mozambique and more recently Mongolia where she photographed the iconic Kazakh eagle hunters of the Altai mountains.

Claire’s work has been exhibited in a number of countries including Belgium, France and Iraq. In September 2018, Claire’s work was exhibited as part of a Handicap International campaign to raise awareness of the impact of explosive weapons on civilians. During the Pyramid of Shoes event in, ninety portraits of survivors of explosive weapons were exhibited in fifteen cities across France.

Go to Top
Join the newsletter
Subscribe for updates on new  projects, exhibitions, prints on offer, discounts, articles and my upcoming photo book.
You can unsubscribe anytime.